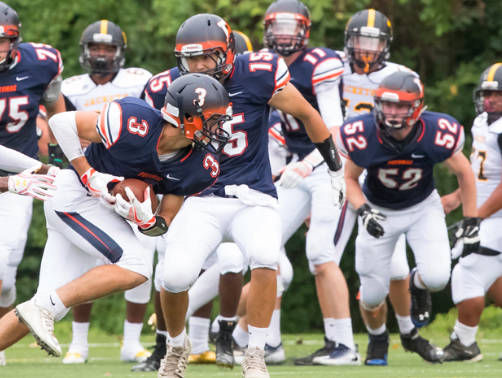 Behind All American’s dramatic rise in popularity

With coronacation forcing us to stay indoors, arguably the most popular activity for Potomac students is Netflix. And with the exception of Tiger King, the most popular show during quarantine is All American, a sports drama based on the true football story of Spencer Paysinger from the Los Angeles area. The plot follows the life of Spencer James, a star wide receiver living in Crenshaw, who moves to Beverly Hills High School. Despite the show primarily focusing on football, the show offers entertainment for all.

“I think the reason I watch All American is because of the plot. It is dramatic and very unpredictable,” said junior Obinna Chuke, who proudly watched Season 1 before it was on Netflix.

Many people love the show for the football aspect, but they also love the storyline off the field.

“I initially started to watch All American simply because it was football-related. And I continued to watch because I realized that the show was a bit more than football. The show displays different kinds of family dynamics and relationships,” said junior football player Brandon Potts.

Many viewers continue to watch because of the incredibly attractive actors and actresses.

“Solid 7.5-8/10,” said junior Evelina Swigart, when asked about Beverly Quarterback Jordan Baker (not to be confused with the female golfer from The Great Gatsby).

“Olivia Baker is bad. Besides that, I love her selflessness. Always thinking of others, maybe just a little bit too much. But that’s better than being completely selfish” said Potts.

However, the show can be a bit hysterical because of its unrealistic aspects, mainly on the football field. The gameplay shown, especially from Spencer James, is quite slow and comedic.

“With the knowledge that the character acting as Spencer is from the UK and didn’t know how to play football I give him an A for effort on the routes. However, when I saw the route initially I was dying laughing because a person with those kinds of routes could never be a national recruit,” said Brandon.