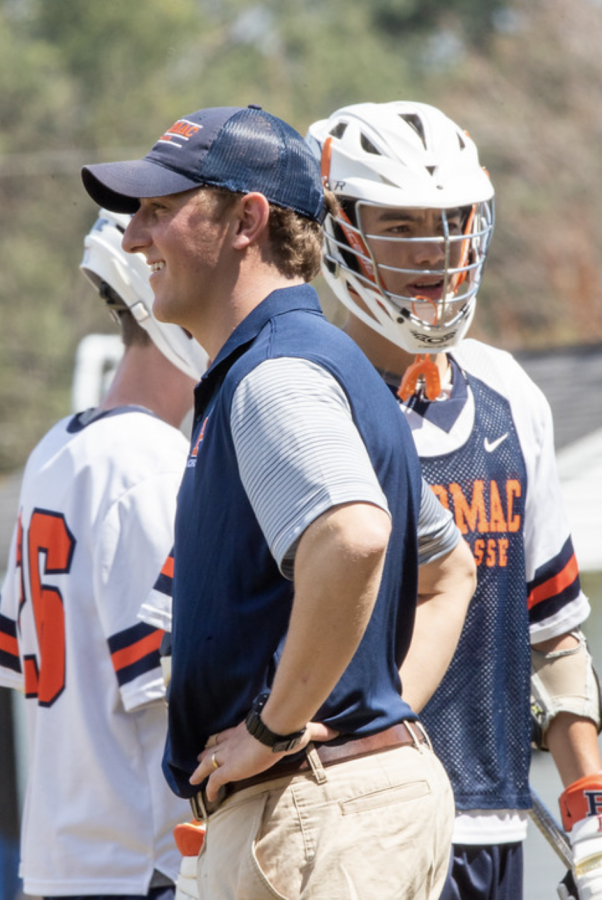 Coach Via to leave Potomac with a five-year lacrosse legacy.

After five years at Potomac School, widely admired teacher and coach Michael Via will be saying goodbye to the Potomac community. Serving in the admissions department, as a history teacher, and the head lacrosse coach, Coach Via is a well known, friendly face in the Upper School hallways.

From the moment Coach Via stepped foot on campus, he found success. In his first year as head lacrosse coach, he led the boys varsity lacrosse team to win a MAC Championship, clinching the title on the turf field against rival Flint Hill.

“Being on campus, being at home, it was pretty special to win that championship at home with all the students there celebrating. I still have a video of all the kids storming the field. That was a pretty special time for our guys,” said Coach Via.

While winning was important to Coach Via, he also strove to build a meaningful and tight-knit lacrosse community within Potomac.

“I remember the first time I met him, we sat out on the Gumtree field and he talked not just about building a winning varsity program, but really building a high quality K-12 lacrosse program. That is something I will never forget,” said boys athletic director Rob Lee.

Coach Via organized lacrosse camps for young Potomac kids to truly foster this K-12 program. Additionally, Coach Via has made deliberate attempts to create the ideal schedule to promote a lacrosse community in Potomac.

“One of the things I am most proud of is our efforts to transform what used to be just separate varsity and JV boys lacrosse teams into a cohesive K-12 lacrosse program at Potomac. This past year we committed to a model where the JV and Varsity games would be scheduled on the same day so the rest of the week we can practice together,” said Coach Via.

When he first came to Potomac, Coach Via identified the need for a more consistent coaching staff. Throughout his time here, he and his staff have successfully been able to create a culture where there is a tight bond between the players and the coaches.

“For us to have success on the field, we need to be able to understand how our guys are working, what classes are like for them, what going on at home, their hopes, dreams, fears and all of that. It is all about the students and the players, but in order to develop these relationships, you need to have the appropriate staff to help make that happen,” said Coach Via.

As both a teacher, advisor, and coach, Coach Via was able to develop unique relationships with his players on and off the field.

This teacher-coach model that is emphasized at an independent school like Potomac was one of the reasons he decided to become an educator.

“Growing up, I was fortunate enough to attend a school where I was to establish some strong connections and relationships with my own teachers and coaches.  As a young student-athlete, these were the people who really motivated me and were able to keep me accountable both in the classroom and on the field. This is part of the reason I got in the education business myself,” said Coach Via.

As Coach Via moves beyond the Potomac, he will leave behind a legacy of success on the field and the strong community he established off the field.

“I hope I will be remembered as a custodian of the program and as someone that left the program better than I found it. The program is much more than any individual or coach and that is something that I have tried to instill in our guys. Playing for a higher purpose than just wins is something we have tried to emphasize over the years with our guys. Ultimately, it is my hope that the boys on our lacrosse teams learned how to be great teammates and how to truly play for each other.  To me that is the ultimate sign of a successful team and program,” said Coach Via.

“I would also like to thank Mr. Kowalik, Coach Lee, and the entire Potomac community for hiring me five years ago and giving me the opportunity to join the Potomac community. It is an experience I will never forget, and I am extremely thankful,” said Coach Via.

Although the COVID-19 pandemic has sadly cut short Coach Via’s final season, the Potomac community will remember him as an energetic, inclusive, and thoughtful teacher, and coach who truly strove to know his players on and off the field.